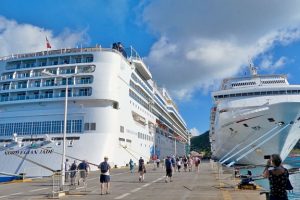 Cruise passenger spending in St. Kitts and Nevis has tremendously increased over the years, registering a growth of 77 percent from 2014/2015 to 2017/2018. Local taxi service and tour operators are certainly reaping the benefits.

The report states that “During the 2017/2018 cruise year cruise tourism generated nearly $3.4 billion in direct expenditures, 79,000 jobs and $903 million in employee wages among the 36 destinations included in the study.”

The report adds, “In St. Kitts every US$1million in direct cruise tourism expenditures generated 14 jobs throughout the economy which paid an average annual wage of about US $8,500.”

The St. Kitts and Nevis Information Service (SKNIS) interviewed two presidents of the three Taxi Associations in St. Kitts. Both stated that the cruise industry has undoubtedly created jobs for locals. As heads of the two taxi associations, they gave feedback on how the 77 percent increase in passenger spending has benefited taxi operators.

David Brandy, President of the Liamuiga Taxi Association, shared the same sentiments, noting that there has been a “trickle-down effect” when it comes to all service providers in general.

“Tourist spending spans different areas. The tourist dollar is spent on tours where they get to experience the islands,” Brandy explained. “On these tours, passengers purchase souvenirs. Most of them want to sample our beer and local drinks. As you know, Carib Beer is brewed and bottled here. Some want to go to the beach and spend some time there. Passengers also visit various restaurants to taste the local cuisine. So those are the areas in which the dollars are spent.”

The tourism industry in St. Kitts and Nevis will continue to grow exponentially in the upcoming years, said Minister of Tourism, the Honourable Lindsay Grant, noting that locals will always stand to benefit year after year, especially in the cruise industry.

It is no foreign topic that the youth in our region are in crisis. With insurmountable rates of unemployment and a number of social issues working against the youth,…