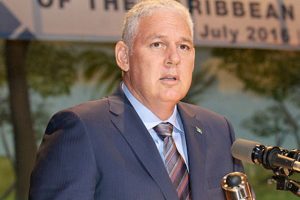 As the Government of Saint Lucia moves to ensure that the benefits of the expanding tourism industry accrue to all nationals, a concerted effort is underway to balance the product offering in the hospitality sector.

During the Chamber of Commerce’s Encounter Series with the prime minister on Nov. 15, Mr. Chastanet spoke on pending tourism investment projects. Among them is the rebranding of the Rex Properties at Rodney Bay. The Rex Saint Lucian is to undergo reconstruction. The Rex Company is now in a joint venture with the Sunwing Travel Group.

Prime Minister Chastanet said government has insisted that the resort be based on the European Plan which is priced only for lodging.

“Government has agreed in principle to renew the lease on the property on the condition that the resort is built to be a 4.5-star product or higher, that has a significant EP component,” he said. “Government will not support an exclusive all-inclusive hotel on that site because of the existing commercial entities in the area.”

The prime minister went on to inform that Invest Saint Lucia (ISL) has completed transactions with a Barbadian-based firm to buy the lands at Choc for a 400-room Hyatt Hotel, which will be a mixture of the European Plan and all inclusive. Construction is due to begin in the second half of 2019.

Invest Saint Lucia has also signed with the GP Group for the development of a Marriott Courtyard Hotel and Conference facility at Pointe Seraphine. Construction is earmarked to begin in February 2019.

The prime minister explained that “in addition to building yachting facilities in Phase One, Phase Two will involve redeveloping Pointe Seraphine with shops on the ground floor and office spaces upstairs. The aim is to get greater utilization of that prime piece of land. Dedicating it to the cruise industry by itself will not be sufficient for economic sustainability.”

On the local investment front, Saint Lucia Distillers is to undertake an upgrade of its plant and the development of a tourist attraction at a cost of $30 million

The British Virgin Islands has seen an increase in the number of visitors to the territory this year, with initial tourism figures up by…