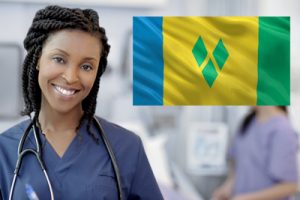 The recruitment of Vincentians nurses to work in the United Kingdom will commence soon, Prime Minster Ralph Gonsalves announced in his Independence Address on October 27.

“Shortly, recruitment will begin from our surplus of nurses which we are training to go to the United Kingdom and that process will start very soon,” he told the military parade at Victoria Park to mark the 39th anniversary of independence from Britain.

Gonsalves further announced that for students now pursuing the four-year bachelor’s degree in nursing, the government will pay one-third of the already subsidised fees. This is in addition to providing them a monthly stipend of EC$1,000 as is done with the registered nurses and degree programmes.

“Clearly, the people know and the nurses know and we all know that this government loves the nurses,” he said.

He further said that supporting loans are available from the Economically Disadvantaged Student Loan programme.

In further comments on education, the prime minister said his government has made 48 awards — the highest ever — available to students who sat the Caribbean Advanced Proficiency Examinations and associate degrees in 2018.

“These are 17 national scholarships, 11 national exhibitions and bursaries; this package amounts to approximately 7.1 million dollars. This is a huge investment in the 48 outstanding students in the 2018 examinations.”

Additionally, the government pays students’ economic cost annually to the University of the West Indies or a similar sum to other universities “so that the total package becomes over 10 million dollars,” Gonsalves said.

That what we are investing in, just this batch of young people,” Gonsalves said, adding that several million more is spent on education of other students, other scholarships, tuition grants, and other forms of assistance, including student loans.

He said that the government was on target for one university graduate per household in SVG by 2030.

The prime minister said that his government is determined to bolster further the assistance granted to its employees who are pursuing undergraduate studies at the degree, diploma, and certificate level in approved priority subject areas at accredited institutions online, the Community College, or the open campus of the University of the West Indies.

He said this assistance would amount to up to one half of each course that is successfully completed.