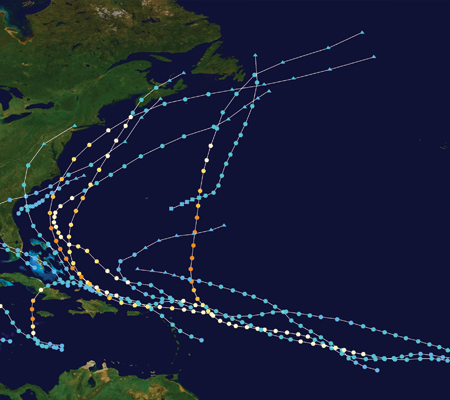 Forecasters have said that the 2018 Atlantic hurricane season is expected to be below normal, contrary to the nightmarish season of 2017, according to USA Today.

An updated prediction, released Thursday by the National Oceanic and Atmospheric Administration (NOAA), stated that this sub-par activity is partly due to a developing El Niño.

El Niño refers to the warming of the surface of the Pacific Ocean. This usually suppresses hurricane activity by sending strong winds across the Atlantic and Caribbean, causing developing storms to disintegrate.

Forecasters say that there is a 70-percent chance that El Niño will form during the hurricane season.

Ultimately, the development of nine to thirteen tropical storms within the region have been forecast by the NOAA. As many as seven of these storms are predicted to form hurricanes.

Last year, 17 named storms formed, of which 10 were hurricanes, including the devastating Harvey, Irma and Maria.

On the contrary, while the Atlantic hurricane season is expected to be calm, the opposite is true for the eastern and central Pacific Ocean where El Nino tends to boost hurricane activity. Already, 11 named storms have formed there.

The hurricane season officially runs from June 1 to November 30.