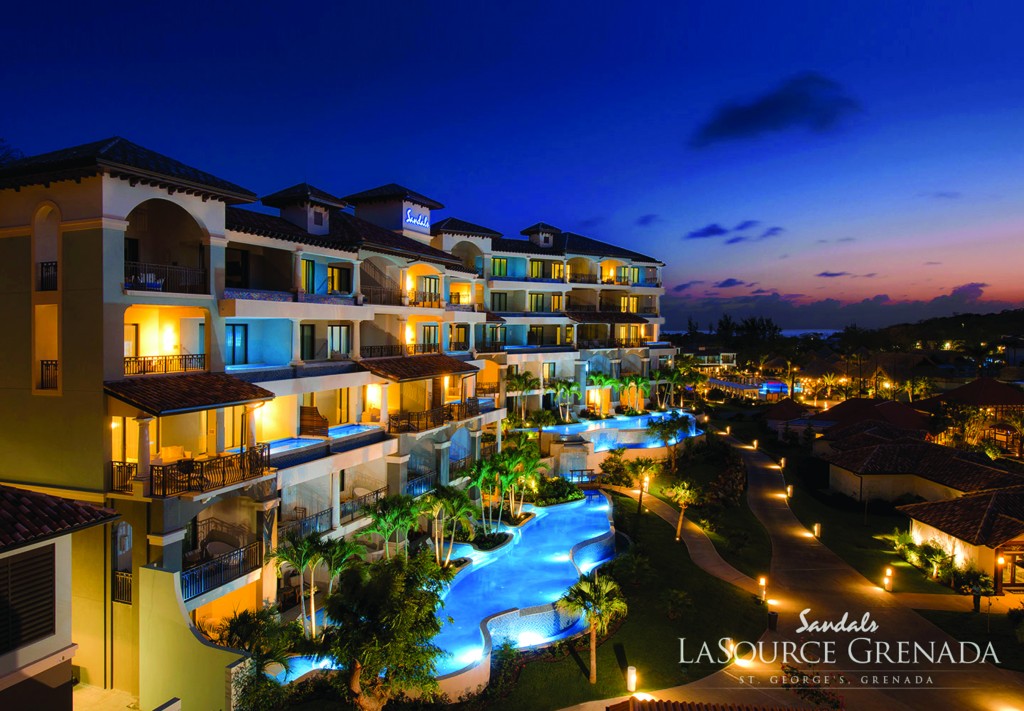 Grenada has soared to regional and international prominence in the tourism market with the construction and opening of the Sandals LaSource Grenada – the first property to be opened in Grenada by the world-renowned Sandals Resorts International.

It all began in 2013 when the Luxury Included® resort chain opened its doors following the record-breaking work of some 1800 construction workers who delivered the more than 225-room resort complete with nine restaurants.

The resort defies every convention of traditional design, taking innovation beyond the realm of imagination, delivering an extraordinary resort unlike anything in the Caribbean. It offerspools in the sky and living rooms in swimming pools along with private plunge pools, cascading waterfalls and meandering river pools.

Sandals LaSource Grenada sits on 17 acres of land along the pristine Pink Gin Beach, offering guests the highest level of luxury with an unprecedented look and feel and has created employment for almost 500 Grenadians.

Sandals’ arrival to Grenada was dubbed a “strategic addition to the hotel sector and a potential game-changer” for Grenada’s tourism industry. This was in 2012 and since then the resort has literally changed the tourism landscape in the island.

Following this massive capital investment, the resort in mid 2014 announced yet another investment in the Spice Isle with the establishment of its state-of- the-art Global Sales & Marketing Center and an 8,500-square- foot Conference Center on the resort grounds. This undertaking was poised to create 105 more jobs in Grenada in addition to the establishment of the Marketing Center where scores from across the island are already employed.

Sandals Chairman, Gordon ‘Butch’ Stewart has credited “the people – their education and attitude” as being the key driver of the company’s continued investment in the Spice Isle,adding that these traits bring a distinct advantage to the company.

Again, in January 2016, the company announced an expansion of Sandals LaSource Grenada Resort & Spa which resulted in the creation of some 150 construction jobs. This also saw the emergence of an additional 32 new luxury suites, taking its accommodation capacity at Sandals LaSource from 225 to 257 rooms, further enhancing the acclaimed Luxury Included® property.

The new Lagoon Nature Reserve Suites, which opened in the summer of 2016, incorporate the contemporary opulence of the existing luxury suites, with the most sophisticated amenities ranging from butler services, smart TVs and other Sandals signature Luxury Included® offerings.

Sandals Resorts Chairman Gordon “Butch” Stewart commented on the expansion announcement: “We have had the most extraordinary two years in Grenada where we saw the demand for our brand and the destination soar.

“We have decided to invest more in our product here, in an effort to meet the high demand the international travel trade has placed on us for Grenada.” Stewart added: “Grenada, one of our newest destinations is part of that redefinition. We challenge ourselves every day to raise our standards and to offer the world new innovations and fresh travel experiences.”

Former Finance Minister Nazim Burke said, “In taking these steps, we recognize that we were doing something that was special but we felt we had to do it. We did it because we recognize the enormous benefit that the presence of Sandals can have, and will have, for Grenada.” Prime Minister Keith Mitchell said, “Sandals has built on the successes of our existing hoteliers and presented us with prime opportunities for partnerships. Every additional hotel investment, if managed effectively, can be a win a win-win for all hoteliers, and for the country.”

Dr. Didacus Jules Director General, OECS We have all been saturated with news and views on the British vote to exit the European Union…