Within 24 hours following the Thursday, June 12, 2014, general elections, I signed an agreement with the YIDA International Group valued at US$2 billion dollars. Immediately after the swearing-in ceremony of the Prime Minister and the Attorney General, on the morning of June 13, 2014, I traveled to the Prime Minister’s Office where negotiations with Yida International commenced in earnest. By 5:00 pm on that Friday afternoon, we had hammered out an agreement that was made public. The story went viral because of the unusual series of events.

Since that affair, one year and four months ago, Yida International has purchased land costing more than US$80 million dollars, and has also spent several millions more on engineering studies, architectural renderings, and environmental studies. The agreement, just as I had asserted, was real. The outcome
has put to shame the naysayers who publicly declared that Yida International was a sham. 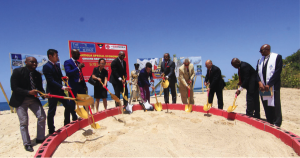 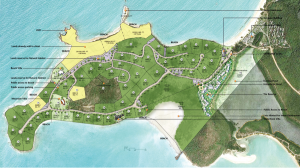 The principals of Pearns Point Development—an intended enclave of very wealthy homeowners—came to the table to sign a US$35 million dollar agreement. The developers have since hired more than 50 workers who are busy planting ducts and cables, building sidewalks and roads, and gutters to take rainwater runoff safely to designated sites.

Re-development and Enlargement of the Port

In that same June 2014 month, the flagship project which I touted during the general elections began to take form. The China Civil Engineering and Construction Company (CCECC), vied to have the China Ex-Im Bank provide the US$97 million dollars required for expansion of the seaport. I sold the Antigua and Barbuda
electorate on a larger cruise port that could accommodate the largest cruise ships; to be supported by a very large cargo port that could serve as a hub for regional transshipment of goods. I also wanted the neighborhoods adjoining the port to look far more welcoming than they now do. The probability of success began to
take form. Months later, the agreement was inked and work on an expanded port will begin in early 2016. Work has already begun on the building of new houses in the same adjoining neighborhoods. 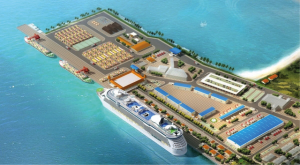 That CCECC agreement is remarkable for the fix it provided to sweep the channel and turning basin, within months of signature. The channel and basin after two decades had become clogged with silt, and the cruise-liners demanded the sweeping in order to continue to call in the Winter Cruise Season of 2014. The CCECC
advanced the US$4 million required to complete that job. The previous administration had entered into a very costly contract with another engineering group. My Government decided to allow that group to keep the mobilization fee it received, but not to allow it to fulfill its contract obligations; the cost was clearly
excessive. CCECC is already moving on the port expansion, and in less than two years, the expanded port will be ready to receive the largest ships.

In July 2014, Vitaly Kryuchkov signed an agreement to purchase the unfinished Hodges Bay Club. He met with the technicians and me, and indicated his willingness to spend US$50 million to rehabilitate the derelict hotel and to cause it to become functional. The partly-built structure sat there unfinished for six
years, following the collapse of the Norwegian bank that financed its partial development. Work has started on its redevelopment though Hurricane Gustavo, a year ago, caused the rebuilding to slow to a crawl; the number of workers there today has increased greatly.

In August 2014, Goat Head Hill and Dutchman’s Bay developers sought a joint venture with the Government. They planned to spend upwards of US$20 million dollars to create new luxury living quarters, relying principally on the Citizenship By Investment real estate option to finance the twin developments.

The Marvels of Sun Wing

In September 2014, the Sun Wing Group out of Canada began discussions to purchase the Royal Antiguan Hotel and to build a hotel of matching size across the lagoon from the 26 year-old property. They guaranteed filling both by the vertically integrated system that saw them operating travel agencies, tour operators,
an airline and hotels. Sun Wing promised to spend US$75 million on the construction alone. Although the purchase of the Royal Antiguan Hotel has not been consummated, the construction of a matching project across from it has moved forward. This project will generate more than 500 jobs in the construction phase and nearly twice that many in the operational phase.

A month later, in early October 2014, I welcomed the representative of a wealthy Sheik to Antigua on a Sunday. He flew from London to spend three hours on Antigua in order to see Morris Bay. He was so impressed that he indicated a willingness to move forward immediately. No dithering. We later entered into
a Memorandum of Understanding for US$120 million. As recently as mid-October 2015, he was back again to reaffirm the Sheik’s continuing interest. The engineering studies, the architectural renderings and the Environmental Impact Assessment are being complete. After all, the residents of Old Road and the surrounding villages wish to know that development will not exclude benefits to them. They have been reassured.

Robert DeNiro and James Packard and the Paradise Found Resort

On November 20, 2015, the Government of Antigua and Barbuda signed another agreement with another developer that also caught the attention of the global media. This time, Robert De Niro, the famous American actor, and James Packard the son of Kerry Packer, agreed to resuscitate the decrepit and shuttered
K-Club on Barbuda. They would spend more than US$250 million dollars to expand the hotel to be named the Paradise Found Hotel, build a golf course, invest in a new runway and hangars to accommodate private jets, and will likely build a proper finger pier to receive the hundreds of containers that will be shipped to
Barbuda with construction materials, furnishings, and equipment. The project will transform the Barbuda landscape and the economic possibilities for Barbuda youth. 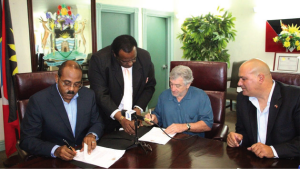 The people of Barbuda gave their blessings to this project by a vote. However, those who wish to be economic saboteurs, with political motives, have sought to block the project’s advance. I have therefore asked the Parliament to pass into law The Paradise Found Project Law 2015. The delaying tactics have not deterred the developers and the Parliament has moved forward on adopting the law, making certain that the project becomes a reality.

The building of hundreds of new homes every year, generating jobs and economic activity, contribute significantly to the Administration’s development goals. The National Housing and Urban Development Corporation has built many new homes.

Economic Assessment of the New Projects

These eight hotel projects and the port re-development project constitute more than US$3 billion dollars in potential capital flows into Antigua and Barbuda. The end result of this increased flow will be growth in the gross national product (GNP); an increase in total consumption, both private and government; and increases in gross capital formation as construction booms, resulting in expansion of transport and other equipment uses. In 2014, the estimated value of GDP at factor cost stood at EC$2,945,870,000.00. The estimated growth of GDP for 2015 will very likely exceed the 2014 year by 2.5%, or will bring the GDP closer to EC$3,019,500,000. Growth of 2.5% in Antigua and Barbuda will be greater than in any Commonwealth Caribbean country, and maybe greater even than each of the countries in the hemisphere. Additionally, given the continued impact on the economy, economic growth will be exponential in future years.

Tourism arrivals will also increase as new airlines begin discharging additional passengers at the new air terminal, opened on August 20, 2015. Jet Blue, SunWing, and other carriers from South and Central America will also be flying into Antigua. Private aircraft will also be utilizing the new runway to be constructed in Barbuda. The cost of airline tickets from the USA has fallen precipitously as the competition increases, and the destination becomes more attractive to the bulk of the passengers who ride behind the first class cabin. It is anticipated that the total of arrivals by air will surpass 750,000 by 2019. The number of cruise arrivals by that date will likely exceed 1,000,000 cruise tourists.

As Antigua and Barbuda moves towards the celebration of 35 years of independence in 2016, the prospects for the future are great.

More jobs will be created, eliminating the high unemployment which decimated the promise of youth during the ten preceding years.

The number of business start-ups will also increase as the Government funds the Antigua and Barbuda Development Bank, the National Development Fund, the Women’s Development Fund and several local projects get started.

The Citizenship by Investment Programme will continue to yield appreciable returns during the coming years, and the replenishment of the fund which it supports will continue to be used to draw down the national debt, as well as to meet expenses when other sources cannot provide.

Transparency and integrity will continue to characterize my administration, and business will flourish in an environment that levels the field among all economic players. Antigua and Barbuda is on its way to becoming an economic powerhouse.

As the United States’ sanctions against Venezuela tighten, St. Vincent and the Grenadines has been forced to innovate to ensure continued fuel security and…