Cuba’s southern city of Santiago De Cuba came alive to the sounds of its annual festive carnival celebrations in July 2015 welcoming thousands of visitors to that historic city in commemoration of the its 500th Anniversary. The Chamber of Commerce and the authorities of the Government of Santiago de Cuba hosted the Cuba-Caribbean Business Forum from July 15th – 17th at the famous Heredia Cultural Complex to provide an opportunity to strengthen economic relations between Cuba and the Caribbean.

The Cuban government presented its business potential in Santiago de Cuba to the rest of the Caribbean encouraging groupings such as the OECS to take advantage of trade exchanges in the areas of Tourism, Agribusiness, Agro processing, Creative Industries among others.

The OECS CBU through its participation in the event was able to establish very important contact with the Cuban Chamber of Commerce which provides a valuable link to all the state owned trading entities and serves as the governing authority through which trade is regulated. In his meeting with the OECS delegation the President of the Cuba Chamber of Commerce Mr Orlando Hernandez Guillen praised the OECS for the tremendous work it has done in keeping the region together and promised to give as much support as possible during the November 2015 Havana International Trade Fair (FIHAV). Mr Guillen spoke of his organization’s promised support to facilitate trade and stressed the importance for the Chambers from both sides to work together to build capacity particularly with the ongoing internal government reform. 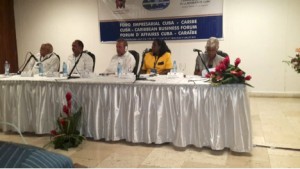 The Vice Minister of Foreign Trade and Investment Lleana Nunez Mordoche expressed her government’s willingness to assist the OECS business community in its efforts at growing the trade with the Republic of Cuba. She was very careful to say that the government of Cuba will open its market to the OECS without expecting any reciprocity and gave her country’s commitment to facilitate top level trade talks during a proposed “Business Mission” scheduled for the last quarter of 2015. The OECS delegates informed the Minister of the OECS Commission’s plans to present an MOU for review by Cuba for possible signing during that Business Mission. She however asked that the document be made available to the Cuban government early to ensure readiness for the agreed 2015 date.

A total of six companies from the island of Saint Lucia also participated in the Business Forum under the cover of the Saint Lucia Trade Export Promotion Agency (TEPA). The companies who to date have given remarkable reviews of their participation and are looking forward to cementing the relationships established are already looking forward to the next major event in Cuba. They are as follows:

To convert this into tangible benefits to our OECS client company base some key functional matters will require urgent attention from strategic stakeholders on both sides who would need to:

Such efforts are certainly worth pursuing particularly in light of the emerging trading arrangements between the United States and Cuba which should actually make trade much easier for the OECS Member States.

The Grenada Government has confirmed the recent opening of a Consular office in Miami Beach, Florida, where approximately 5,000 Grenadian expatriates reside. At the…